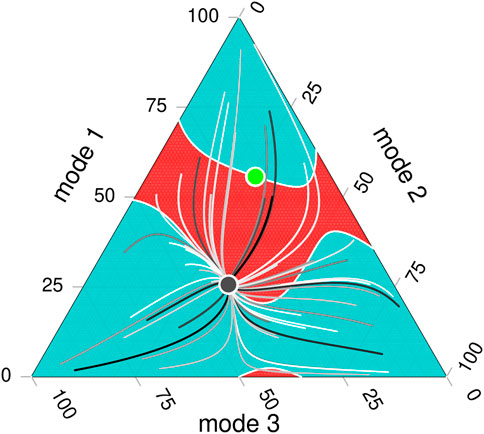 We explore the individual decision-making processes of commuters using various forms of transport within a city, forming a modal share which is then built into a dynamical model using travel time as the key variable. From a randomised start in the distribution of the modal share, assuming that some individuals change their commuting method, favouring lower travel times, we show that a stable modal share is reached corresponding to an equilibrium in the model. Considering the average travel time for all commuters within the city, we show that an optimal result is achieved only if the direct and induced factors and the number of users are equal for all transport modes. For asymmetric factors, the equilibrium reached is always sub-optimal, leading to city travel trajectories being “tragic”, meaning that individuals choose a faster commuting time but create a slower urban mobility as a collective result. Hence, the city evolves, producing longer average commuting times. It is also shown that if a new mode of transport has a small baseline commuting time but has a high induced impact for other users, then introducing it might result in a counter-intuitive result producing more congestion, rather than less.