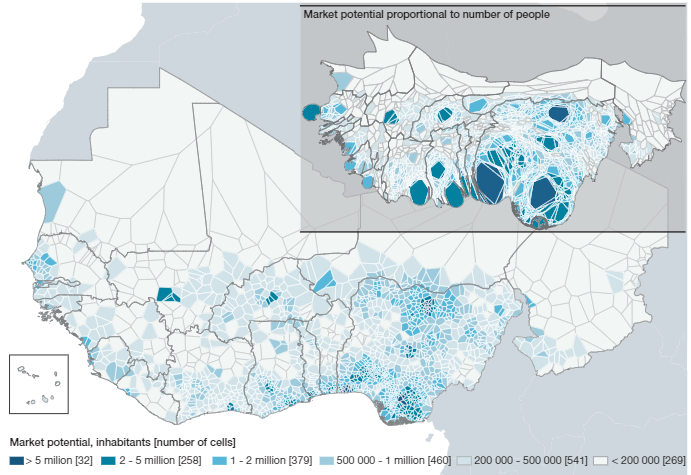 The number of people living in cities increased from 5 million in 1950 to 133 million in 2010. During the same period, the number of towns and cities with more than 10 000 inhabitants grew from 159 to close to 2 000. A large majority of these agglomerations are secondary cities and small towns that act as hubs and catalysts for local and regional production and supply chains, as well as for the transfer of goods, people and information, linking the local and regional economies to the global economy. The intensity of the spatial interactions of cities has strongly increased with population growth, urbanisation and higher urban density. This paper, part of ongoing work within the Sahel and West Africa Club Secretariat to integrate urbanisation and city growth into analyses of major trends in the region, lays the foundation for the development of a systematic method to capture and describe these spatial interactions. It does so by examining four variables: city size, market potential, urbanisation level and local dominance. These variables, in turn, help to define seven different city groups that can be used to classify West African agglomerations. The initial results of this work reveal the diversity and distinctive behaviours of cities in the region, providing a new perspective on urbanisation dynamics and the influence of spatial variables on urban growth rates, the emergence of new agglomerations and the clustering of cities.