Every year the UCL Mathematics Department hosts the De Morgan Dinner, an event which gathers professors, researchers and students to celebrate the ending of the academic year. It is a fancy evening which begins with a sherry and usually ends in a pub several hours later. Dring each dinner, a guest gives a brief speech about maths or something related, and this year, I had the honour to be the invited guest.

I was able to talk about Chalkdust, a magazine for the mathematically curious, that I started with some of my colleagues a couple of years ago. After being part of a large project for more than two years, I have many things that I would like to share: how it started; how I brought some copies of Laberintos e Infinitos, a maths magazine from Mexico I directed a few years ago and how it became the magazine we were trying to mimic; what is it like to finally see a printed magazine, what is it like to spot a mistake and laugh about it, the happiness I felt the first time we received an article, the pain/excitement that it is carrying the copies when they finally arrive and more. I picked only a few topics to talk about during my speech.

Women and minorities in mathematics

My guess is that people who have never felt what is it like to be a minority or who have never been told …but you are Mexican/women/etc. assuming that for that reason the person is less something (whatever that something might be), this topic might not be that relevant, but is one of the most relevant topics, at least for me. If we put together all the people from Africa,  from Latin America and all the women of the world, we have fewer Fields Medallist (like the Nobel Prize in Mathematics) than UCL… a single university. Women and minorities in mathematics should be celebrated since they are here despite the fact that they most likely have constantly fought an environment which puts them in a less favourable position than others.

And what does a maths magazine, such as Chalkdust, is doing about it? We have written about relevant female mathematicians (Mary Somerville and Florence Nightingale), we have interviewed a couple of truly inspiring women in mathematics (Hannah Fry and Andrea Bertozzi) and we also interviewed Artur Avila, the only Fields Medalist from Latin America so far. More relevant is that a large number of our articles and blogs have been written by women.  But more importantly, the women who have been part of the Chalkdust team are strong role models of successful mathematicians and people who I admire. 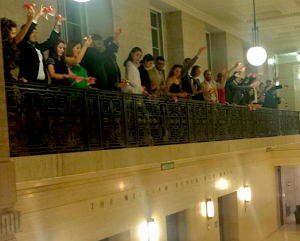 Sometimes you are able to do some sort of hands-on experiment to do maths. Some months ago we filled a tub with a non-Newtonian fluid (a fluid which becomes solid under pressure). Last year we constructed a sphere using 455 recycled paper cups and so this year, I decided to try some papercupters during the De Morgan Dinner. Each guest to the dinner received a couple of paper cups (recycled too!) to construct their own papercupter and compete against each other. The contest was very exciting since I could see all of my friends trying to design their best papercupter and discussing among each other what made one better than the other.

Professors, lecturers, researchers and young mathematicians tried their own papercupter.

By far, the most important message I wanted to share during my speech is that Chalkdust has achieved many things only thanks to its team. Each person who joins the team brings new ideas, a newly and refreshed enthusiasm and it encourages the project to carry on. More than 30 people have actively taken part on Chalkdust and it is thanks to each and every one of them that there is a stable magazine nowadays.

I am now directing what will be my last issue being part of Chalkdust, hoping that new generations will carry on with the project. I am sure that I will go back to this, my Chalkdust days, and I will remember them as one the most special moments of my life. I hope my colleagues and friends feel just as proud as I do with respect to Chalkdust: we created a whole magazine out of thin air! 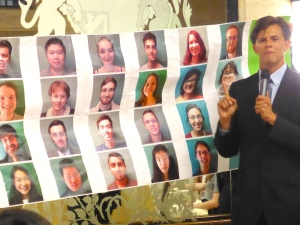