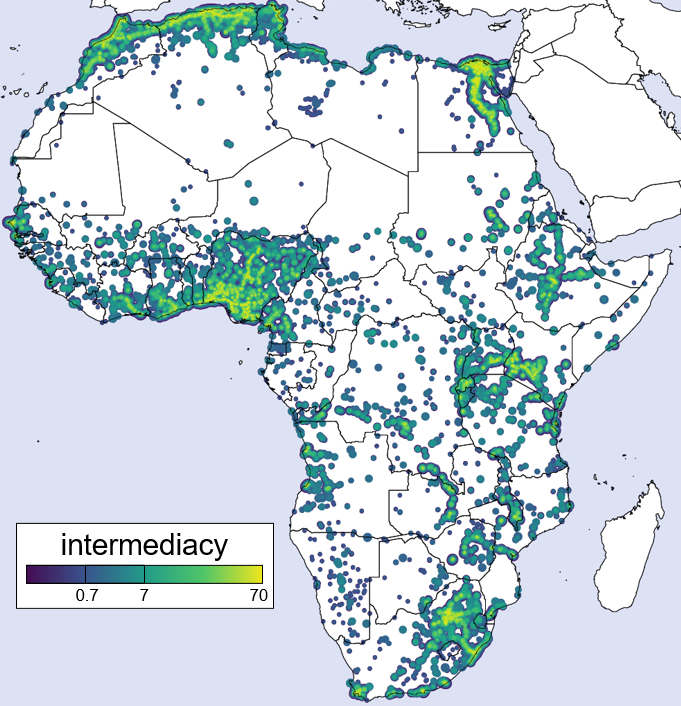 We construct Africa’s urban network obtained from OpenStreetMap road data. City centrality is measured using two indices: by the degree of cities, so the number of roads that connect it, and by the intermediacy, or the number of intracity journeys that pass through it. The number of trips between cities is approximated using a gravity model based on city size and time travel. The additional time for crossing an international border is used as a model parameter to proxy the cost of political barriers in the connectivity and trade of cities and countries. Results show that city degree scales sublinearly with population, meaning that larger cities are better connected to the network. Most small urban agglomerations are isolated corridors (a degree of two) or terminals (a degree of one). However, small cities may have a high level of intermediacy if they have a high degree and proximity to large urban areas. The intermediacy of cities with less than one million inhabitants depends on the size and degree. For cities above one million inhabitants, intermediacy depends mostly on city size. The intermediacy of cities, mainly those near international borders, is highly sensitive to border delays. Some countries are also susceptible to border delays. In Benin and Togo, a one-hour wait at a border corresponds to a decrease of 19% of their intermediacy.